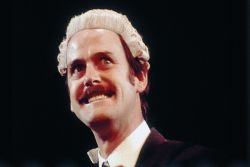 “[Most] patients would much rather be a live problem than a dead certainty.”

There are those who say that holocaust denial is a crime; and those who say that the BBC had no business allowing the BNP leader Nick Griffin space on Question Time. Giving air to vile thoughts, they say, allows those thoughts a legitimacy they do not deserve.

Dr No has no truck with such argument. He believes vile thoughts will always exist amongst us; and that it is better that they be seen and challenged in the light of day, lest they be pushed underground, and fester and corrupt in the darkness of the night.

And so he is all for the debate about KW taking on all comers. Chief amongst the combatants are the doctors, the lawyers, the ethicists and the priests.

The lawyers, of whom it must be remembered that, when a case goes to court, half will always be found wanting, frame all within the argument of law. There is an occasional bleat that they too have moral sensitivity, and that they too have sleepless nights as they agonise over the rights and wrongs of allowing a death, but come the morning, they will follow the legal compass.

And then there are the ethicists, with their argument and debate, and absence of conclusion, who all the while sow their malicious seeds of mischievous doubt.

And lastly there is the God Squad, who, naturally, of course have God on their side, and so argue from a position of moral certainty. They know, because Moses told them so.

These, then, are the combatants that are being tested in the furnace of debate. How, one wonders, is this debate being conducted? What, if anything, can be gleaned from a look at the processes of this debate, and at what lies behind that which is said?

Now, the first thing to note is that is that two of the main groups – lawyers and ethicists – are trained in the arts of argument and debate. Doctors, on the other hand, are not. One might suppose, therefore, that the doctors are at a disadvantage, and indeed they are; at least this one feels he is. Lawyers have a habit of tripping up doctors, and so Dr No is being careful where he treads.

All the more so because the lawyers – well – being lawyers, they might just introduce an element of cleverness into their arguments. There might even be some disingenuousness. And, as it happens, there is.

The first disinegenuity is that the lawyers are keeping mum. There is a striking lack of legal comment about the Wooltorton case. The lawyers are exercising their “right to remain silent”. There is, Dr No suspects, a reason why this normally notably vociferous group are staying quiet: they know that they are on a sticky wicket. They know they got the law wrong on this one, and most are keeping their heads down.

The second disinegenuity is, shall we say, not playing a straight bat. One of the very few legal opinions out there, and which has come to be seen as the definitive legal statement on Wooltorton’s case, has been written by a Professor Shelia McLean, a Professor of Law and Ethics in Medicine at Glasgow University.

Professor McLean, who has more letters after her name than a dog has hairs on its back, makes a robust statement that Wooltorton had capacity; and that therefore the doctors were right to allow her to die. What Prof McLean does not tell us in that piece is that, as it happens, she is also a so-called “Distinguished Supporter” (pity all those poor undistinguished supporters) of the British Humanist Association – an association that numbers amongst it main aims a campaign to legalise assisted suicide. Could it be that she is not entirely impartial on this matter; that she might be, as it were, batting for the other side?

In all likelihood, yes. She has even co-authored a book on euthanasia in which she argues “clearly and forcefully for the legalization of physician assisted suicide”.

The ethicists, on the other hand, appear to be playing a different game, a game of skirmishes on shifting sands, of shimmering chimeras, and arguments being popped out from behind bushes. As philosophers, they have mastered the unmasterable, and penetrated the impenetrable. They have even got their heads round the ideas of the likes of Kant and Heidegger, which enables them to explode the occasional deontological bomb when it suits them.

Now, the trouble with the ethical approach is that, as I have said before, it takes us to a place where the moral compass spins, anything goes, and nothing is beyond contemplation. Dr No does not have a problem with examining ideas, indeed he welcomes the process. In the safety of the debating chamber the compass can spin, and the world be turned inside out, just so long as we don’t export half-baked or chimerical ideas into the real world where they may mutate into doctrines of sinister lethality.

Whenever malicious seeds of mischievous doubt are sown, we should be on our guard. We must join the lawyers and the ethicists at their games, and play as hard as we can to ensure that those who are more skilled in the arts of argument and debate do not carry the day merely because of their greater skill in these arts.