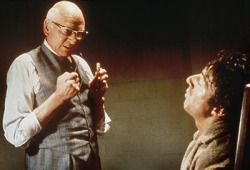 Dr No’s NHS dentist is a likeable old cove. Asked how he proposed to fix Dr No’s new crown in place, he announced ‘Bostik Number Five’ – a Dr No response if ever there was one. So – just to be clear – this post is not about knocking dentists as a profession. What it is about is looking at what happens when you run a substantial private mostly insurance based system alongside a publicly funded NHS one; and what has happened in dentistry does not bode well for the rest of the NHS.

On Monday, Channel Four’s Dispatches programme invited dentists to open wide. A number obliged, and an unedifying collection of drill sharks, cement mixers and card snitchers sprung into view. The general wheeze was to get you, an NHS patient, in the chair, and then offer a Hobson’s choice of private treatment, at which point wallets, inevitably, opened wider than mouths.

And where dentistry has gone – as indeed, in its own way, has higher education – the rest of the NHS could so easily go under the Lansley reforms. Consider GPs, for example. Much has been said about their proposed commissioning role, but we should not forget that first and foremost, GPs are providers, providers, as it happens, who, operating under the ‘independent contractor status’ system, are small private business providers who are in effect obliged, under the current system, to contract with the NHS to provide NHS medical services to NHS patients, but who nonetheless remain, all said and done, and under the skin, small private businesses.

Once Lansley’s Big Bang has hit the NHS, with its allowance for ‘any willing/qualified provider’, there will be no bar – if anything, there will be encouragement – to GPs forming themselves up into private provider federations; indeed, the Royal College of general Practitioners has already smelt the money, and have helpfully provided a ‘toolkit’ for practices keen to tool up in the federated way.

Naturally enough, this is all being done under a banner of better services. “We believe that Federations, as providers of services, can work well alongside Consortia, and that there are considerable opportunities for Federations to maximise benefits for patients” says Professor Steve Field, in his Foreword to the Toolkit. Too right they can ‘work well alongside Consortia’. What he doesn’t add, but we might, is that it will also offer considerable opportunities for Federations to maximise profits for partners.

So far, so so, one might say, since all the money sloshing around is still NHS money: the services provided are still being paid for out of public funds, as willed by the current, and all previous, NHS Acts, under the Secretary of State’s duty to provide a free at the point of delivery comprehensive health service. But once that duty is removed, as the proposed Health and Social Care Bill will do, and GP consortia are up and running, infiltrated and assisted by American and American style health insurance providers, it can only be a matter of time before some bright spark says:

‘Hey guys – why don’t we do for medical services what dentists have already done for dental services? Haul the punters in on NHS terms – and then offer them a Hobson’s choice of private, insurance based care? Who in their right mind is going to risk that run-down grubby NHS hospital when over road we can offer our shiny new Federated clinic – all yours for less than the daily cost of a packet of gaspers?’

Nor does it matter one jot what the Tories intend for the NHS. They can profess love and devotion to the NHS and its principles, and that it is safe in their hands, until the cows come home. The inescapable fact is that, whatever their intentions, the proposed reforms will create a system in which a parallel private insurance based system is not only possible, but, in a market-based profit-motivated system, inevitable.

In Schlesinger’s film Marathon Man, Olivier’s character dentist Dr Christian Szell repeatedly asks Dustin Hoffman: ‘Is it safe?’ Central to the film is the fact that Hoffman has no idea what ‘it’ is; but were ‘it’ to be the NHS under the Tories’ proposed reforms, then the answer could only be a resounding ‘no’.