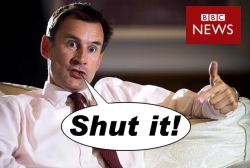 Like a pair of blind impotent bulls, Humph and Jimbo crashed about the Today studio this morning, breaking bad, but not much in the way of news. The programme reverberated to the dull thud of blunt horns getting stuck in wooden stories. Humph deployed his standard technique of exclaiming ‘Ha!’ every time an interviewee started to answer a question, to put the interviewee off balance, while Jimbo has extended his extended question technique by inserting…long…pauses. More crotchety than ever, Jimbo has even started to avoid questions altogether, preferring instead to crochet together a long series of statements…and pauses…and…assertions, more waffle, more saccharisms, more Jimboisms…before delivering a final semi-triumphant statement, leaving the by now stunned hapless interviewee little to do except to agree.

For some reason, this morning’s programme contained a number of rehashed medical stories. We had the one about antibiotic resistance, in which the CMO Dame Sally Davies foretold the end of modern medicine as we know it, a newsworthy item largely ignored by Jimbo, the one about GPs not coping, and a partly new one about replacement guidelines for what Humph called the Liverpool Car Pathway. Ha! Angry palliative care nurses called in to correct Humph’s repetition of the zombie fact about dying patients so dry they were forced to suck water from sponges, a street variant of the original zombie fact about patients so dry they were forced to drink water from flower vases. The sponges, for those in the dark, are an easier way for patients who find it hard to swallow. But, as is so often the way with the BBC, it was what was missing from the news, especially when it involves government and health, that became conspicuous by it’s absence.

A slow adopter of social media, Dr No does nonetheless see it has it uses. One important use is airing the news the BBC and other major outlets ignore. At the risk of sounding a bit like Humph talking about rapping, Dr No notes the trending of the rather neat hashtag #weneedtotalkaboutjeremy to get the news out about a petition calling for a Commons debate on a vote of no confidence in Heremy Junt, the Health Secretary, largely over his crack-pot scheme to impose seven day working contracts on NHS staff. The petition already has over 200,000 signatories, more than twice that needed to trigger the debate, yet it seems in newsrooms across the country the word is not #weneedtotalkaboutjeremy, but rather, as they might say on ISIHAC, #weneedtokeepshtumaboutjeremy.

The BBC still broadcasts outstanding material – world-class drama and unbeatable comedy like ISIHAC spring to mind – and where, in the news, would we be without Fiona ‘I’m wearing a leather peep-hole bra, more on that story later’ Bruce or – occasional Today presenter that she is, though always better on the box – Mishal ‘make it atomic for me’ Hussein. But the craggy old men are breaking bad. It’s not just Humph and Jimbo. Hoo ‘that’s that old bore John Simpson for you again, waffling on in Tripoli’ Wedwards’ mood is increasingly matching his countenance which, to borrow from a phrase, now looks like two microlight aircraft have crashed into the North Face of the Eiger. Even Simpers himself, though sartorially as perfect as ever, is showing signs of struggling with the words. Of the Dimblebot brothers, Dimblebot J still manages a functional turn every now and then, but Dimblebot D has long given up any pretence at any connection with the news or current affairs, and instead runs mindless gladiatorial contests for the mob on late night weekday TV.

Over the time it took Dr No to write this post, over fifty new #weneedtotalkaboutjeremy tweets have appeared. This is how open access social media both report and at the same time create the news, ahead of and sometimes above the traditional media. The cost of open access is high noise to signal ratios, and an almost complete lack of editorial discipline; and the sheer volume of material published guarantees ephemerality, as the new swamps that which is barely a few hours old. But that very same open access also carries powerful advantages. Social media can be quick, and responsive, but, in a world where we need the Fourth Estate as much as ever, if not more so, perhaps its greatest advantage is the lack of editorial interference. People can, and do, say what they want to say, and so long as what is said is not illegal, long may it continue.

Being spontaneous, social media can never be representative – the eight out of ten cats problem – but it can be quasi-democratic, for what is democracy, if not rule by those who can shout the loudest. And it can be a very useful source of sound news, every bit as rigorous as that produced by #weneedtotalkaboutthebbc. Only this morning, Dr No came across a tweet: ‘Almost half of junior doctors leaving! Low morale and burnout. Hunt still doesn’t get it! #weneedtotalkaboutjeremy’ with a four year graph showing declining numbers of F2 continuing to specialty training. Another tweet gave the source, and sure enough, the figures in the graph are the official figures – see Table 4 on page 4. Though the bare figures are correct, they don’t tell the whole story, another hazard of a medium whose longest breath is limited to 140 characters. But, as the source is available, no problem: we can check the figures for ourselves.

Heremy Junt wants seven day tractor production to go up, at the same time as it appears the production of tractor drivers is going down. That seems like a newsworthy story to Dr No, worthy indeed of attention by the national media, including the BBC. Instead, we learn about it on social media. Certainly, #weneedtotalkaboutjeremy, but perhaps just as much we have to recognise the BBC is breaking bad, and so can no longer ignore it: #weneedtotalkaboutthebbc.